What you’ll hear on Land of Doubt is stunning, beautifully arranged strains of chords and melodies with lyrics deeper than the roots of an old oak tree. Baker is well-known for surviving a violent terrorist attack in Peru in 1986. He suffered some hearing loss in the explosion but has defeated all obstacles to emerge as a respected songwriter and performer.

Land of Doubt opens with simplistic yet complex guitar chords from Will Kimbrough on “Summer Wind.” I am immediately reminded of Willie Nelson’s style of intermingling guitar licks with meaningful lyrics.

“Same Kind of Blue” pays tribute to a shy young soldier named Charlie, who was sent to Viet Nam to fight the Viet Cong also known as Charlie. “It was a long way to go for a boy named Charlie/There was snakes, there was jungle, there was all kinds of gnarly/Fighting somebody everybody called Charlie/Was a mean kind of joke/Charlie fighting Charlie…”

“The Silvered Moon” is a forty-eight second instrumental that begs for candlelight and a glass of wine. A tender love song, “Margaret” is a treasure. “Love Is Patient,” says so much on such a deep level. “She said, ‘Please come home’/It’s so late/I worry/I wait/Love is Patient/Love is Kind/Love is hard/Love is blind…” I was drawn by the sad refrains of “Leave,” as it tells Faith to leave because it’s squandered a man’s trust.

More instrumentals, “Pastures Fit for Thoroughbreds” and “Song of Sunrise Birds” are incomparable music arrangements with Dan Mitchell on Trumpet.

Only clever songwriters like Sam Baker and Mary Gauthier could compose lyrics about a girl with a drug addiction, and bring “Moses in the Reeds” into it.

Another tune that grabbed my attention was “Peace Out,” a break-up tune woven so implicitly that you almost miss the message. “She’s a very nice girl/Going with the flow…Peace out/Letting me go.”

“Where Fallen Angels Go” is another exquisite instrumental that moves with an ebb and flow blending keys and strings that feature David Henry and Eamon McLoughlin.

“Land of Doubt” ends this album with a culmination of every aspect of each song rolled into one. If you’re a fan of incredibly beautiful music and deep lyrics, you are sure to love this new album from Sam Baker. Visit http://www.sambakermusic.com for more! 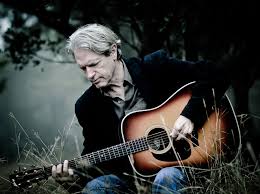 Land of Doubt is also available on Amazon