RICK:
One time I had a fancy baby blue Cadillac Convertible, ElDorado Biarritz. Man, that was a helluva car. I’d ride around Brownwood with the top down like I was king of the world.

(You can see the tail of the car in this picture. I searched for ones that I know I had at one time that showed the full car, but cannot find them. Too many moves. 😦 ) 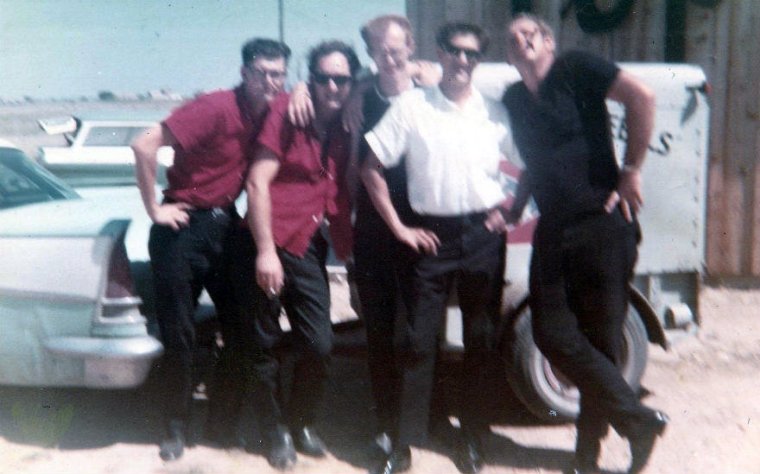 It was important back then to look good. You had to appear to be high rolling. If you didn’t, they wouldn’t want to pay you anything.

I had a fabulous guitar player one time that I brought back from California with me. I had met him on one of the trips out there to play. He was a guitar genius. It turned out that he was Roy Clark’s uncle, Gene Clark.

We were traveling around playing here in Texas when we stopped one night at a truck stop. There was a little raggedy country boy sitting on an overturned crate outside by the door and he had a little toy guitar. When he saw us, he jumped up and said, “Oh, y’all are a band. Aren’t you?” Of course, we told him we were.

His eyes lit up and he said, “I’m learning to play guitar and I can play “Honky Tonk.” He named two or three other songs he could play. Then he said, “I ain’t got a very good guitar, though.”

He went on. “I put the best strangs in the world on it. I use them Black Diamond. Them’s the best in the world. Says so right on the package.”

I agreed with him and we went on inside to order, or whatever we had stopped to do. He followed us in carrying his guitar.

Gene asked the kid if he could see his guitar and the boy handed it to him. Gene sat down with it. It was one of those little cheap ten dollar guitars, not a Gene Autry, but something like that. So, Gene tuned it up and then started playing it. He literally was burning the strings up on it.

That little boy stood there with his mouth open. He couldn’t believe that sound was coming out of his guitar. Ol’ Gene could make a tin can sound good and he was making that little toy guitar smoke.

After a few minutes, he stood up and handed the guitar back to the kid and said, “Well man, I don’t see a thing in the world wrong with your guitar.”

The kid still in shock replied, “I guess it’s a better guitar than I thought it was. Thank you, mister.”

We left him there thumping on his guitar. He had found out that he had a heck of a good guitar. I’ve often wondered if that incident was a defining moment in that kid’s life and whether or not he grew on up to be a guitar player. You just never know.

But, that was the caliber of guitar player Gene was. He hung around Texas playing with me for about a year or so and then headed on back to California. I lost touch with him after that. He was one of the best guitar players I’d ever run across. But, like so many, he had a bad alcohol problem that kept him from being more successful.”