Last week when we left Jonah, he was settling into his new hut. Let’s check in and see if he’s making progress toward getting off the island.

Tidus came and went. Jonah never knew when the kid would show up, but he always came bearing some sort of gift each time. Jonah now had a more comfortable abode that made daily survival less stressful. And, it had been days since he’d seen the fanged beasts. Jonah was sure that was due to the frequent visits from Tidus.

He’d scoffed when Tidus mentioned that the bigger hut and more comfortable surroundings allowed him the time he needed to focus on himself and do the work the Wise Ones had demanded of him.

Jonah finished “The Four Agreements,” and started on “The Dark Side of the Light Chasers.”

He now understood the purpose of the journal.

At the end of Chapter Two, he tackled the exercises.

Question #1: What are you most afraid of?

Jonah thought long and hard. He chewed on the end of the pencil. He didn’t have many fears. He’d spent years making sure others feared him. Okay. Skip that one. Next.

Question #2: What aspects of my life need transforming?

That answer required no thought. He needed to get off this godforsaken island and back to his turf.

Question #3: What do I want to accomplish by reading this book?

Same answer – to get off this godforsaken island.

Question #4: What am I most afraid of that someone else will find out about me?

He sat back on his haunches. He didn’t much care what others thought of him. That hadn’t been important. Okay. Skip that one too. Next.

Question #5: What am I most afraid of in finding out about myself?

He reached for a small mirror Tidus had brought on his last visit. He stared at his reflection. He’d always been told he was handsome with his dark eyes and hair. But the man looking back at him in the mirror had aged. While he’d worked daily to stay in good physical condition, had he let his mind get soft? Was that what he was afraid to discover? That beneath the hard exterior beat a soft heart? That bit of information would tarnish his reputation for sure. 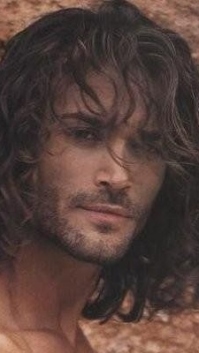 He laid the mirror aside and read the next question.

Question #6: What is the biggest lie I’ve ever told myself?

He knew the answer but, refused to write it down. He hated this kind of stuff.

Question #7: What is the biggest lie I’ve ever told someone else?

The answer to both questions were the same.

He closed his eyes and went back to that dark alley where he first killed. The scene unfolded in his mind. The look on the boy’s face. The begging and pleading. The jeers from others who stood by. A tear squeezed its way out of the corner of his eye and ran down his cheek. He hadn’t wanted to do it, but if he’d backed down then, he would’ve lost their respect. No one had seen him retching behind a trash can a few minutes later after they’d all moved on down the street. No one had seen him curled up in the fetal position crying, regretting. If he could take it all back.

He jumped to his feet and stripped off as he ran straight to the murky water. It didn’t matter that the gray mud sucked his toes down or that the stench attacked his nostrils. A strong urge to wash away the memory was all that mattered. He put his head under and swam back and forth until exhausted, he pulled himself up on land.

Tidus ran to meet him. “Are you okay, Jonah?”

“Let me help.” Tidus placed a hand on Jonah’s shoulder.

Jonah shoved his hand away and yelled. “I said go home. I don’t need any help. I just need to get off this shit hole of an island!”

Tidus stumbled backward. He turned to leave, then stopped. “At this rate, you’ll never get to leave.” He dropped something at Jonah’s feet. “Here. I brought you this.”

Then he turned and ran.

Jonah stared at the object hating himself with every ounce of energy he had. The Wise Ones had been wrong. There was nothing about him that was worth saving.

He picked up the soft leather pouch.