If you’ve read Flowers and Stone, you know that it was a big scene and turning point in the story when Rick (aka Luke) took me (aka Darlina) to his house in Brownwood for the first time.

One of the things I noticed right away was the bed. Made in the 1800s, its black and gold ornate metal frame caught my eye. He told me he had bought it at an antique store in the early sixties. 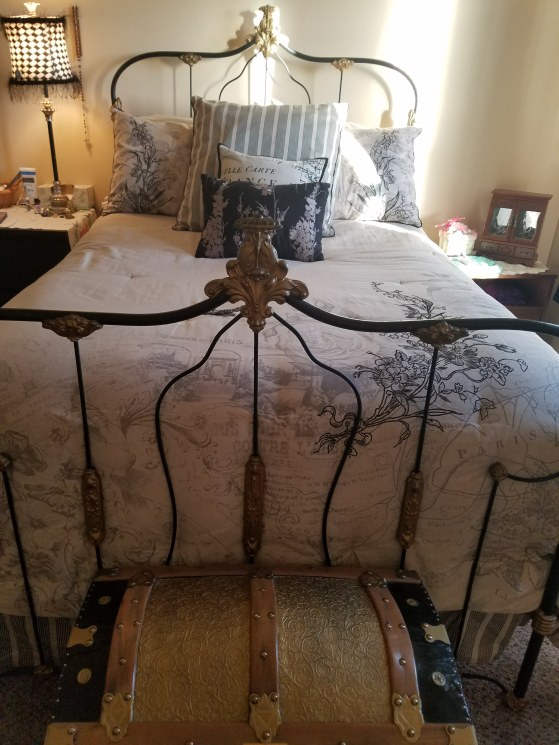 The second thing I made note of was a holster hanging from the centermost point of the head frame with a pistol stuck in it and a leather sheath that held a bowie knife.

For Rick back then, these were simply standard every-day items. He played a street dance in Round Rock every year in celebration of Sam Bass, and he wore that gun belt, as did many others, to the event. Obviously, gun laws were quite different in the sixties and early seventies.

At any rate, after he was incarcerated, I often wondered what had happened to the bed and figured his parents sold it.

When he came home in 1985, one of the first things he found in his nephew’s house was the bed.

It had survived and remained in the family for all those years!

He promptly brought it home, gave it a new coat of paint, a new mattress, and it became OUR bed.

I still have it. Of course, it had several new mattresses over the years, but I sleep on it every night, and this is a tribute to The Bed.

I first knew love on this antique iron bed.

Indescribable heartbreak found me on this bed.

Young and dumb, I lost my way on this bed.

And then I lost the bed, but not my dreams.

It wasn’t until many long years later that the bed returned. Still pristine, still intact…waiting. How ironic that it had not disappeared.

It knew all our secrets, all our pain, all our dreams.

I remember one night I awoke in the early hours of the morning, to find Rick awake as well. I told him of a dream I had been immersed in, and as I related it, he interrupted and told me the ending. He had been dreaming the same dream. Bizarre? Well, yes, I suppose, but it happened.

And then Rick became ill. He no longer had enough strength to get back to the bedroom. A hospital bed sat in our living room, and our bed remained empty and untouched, for I would not leave him to go sleep in it.

I wonder what will happen to it when I am gone. Will my children recognize its significance and preserve it, or will they sell it because it bears no meaning to them? Perhaps I should make my wishes known ahead of time. But, on the other hand, does it really matter what happens to it? I think not. It served its purpose for Rick and will serve me until I am gone. Perhaps I will get to leave this earth on our bed. Who knows?

At any rate, this is a tribute to an inanimate object that holds so much meaning and memories for me — THE BED.