I very recently had the pleasure of interviewing the ever-enigmatic Kinky Friedman for a magazine feature. He has released an album after a forty-year hiatus, CIRCUS OF LIFE. I want to share two stories with you.

First, he talked about a phone call he got from Willie Nelson at 3 am. Kinky was in Texas and Willie in Hawaii. The conversation went like this according to Kinky.

Willie: “Hi, Kinky. What are you doing?”

Willie: “Kinky, that’s a sure sign of depression Turn it off. Turn off Matlock and get busy writing.”

On this album, I found a tribute song to Willie, “Autographs in the Rain.” Kinky stated that he’d seen this happen many times. People would be lined up for autographs and when the rain started. the fans didn’t leave and neither did Willie. And, while I couldn’t find a photo of Willie signing in the rain, I did find one of him signing a woman’s boob. 🙂 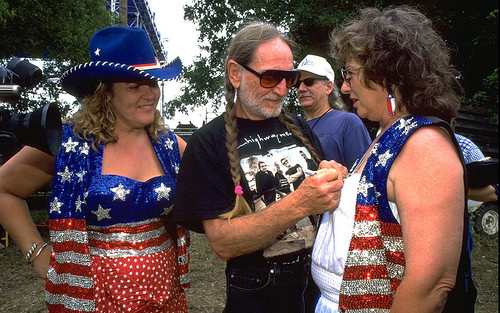 Everyone loves Willie. And the main reason for that is he has always taken time to connect with his fans. He understood that if those people didn’t pay their money and spend their time to come and see him, he wouldn’t have much of a career. And, he’s always been sincere about it. Many of today’s artists have forgotten that or they are just paranoid to get too close to their fans.

I have met Willie personally on three occasions. Once, Rick and I even had dinner with the band backstage. I was awestruck!

I love Willie Nelson. He is now 85 years young and eventually, his journey here will end. That day will break my heart. Here are a few personal photos of the graciousness of Willie Nelson.

And, then last, but certainly not least, I want to share a pen and ink drawing Rick did of Willie. I thought he captured the essence of Willie Nelson perfectly!

I can’t say why I was particularly drawn to share this with you. Perhaps it was the conversation with Kinky that sparked it. The feature article will appear in the July issue of Buddy Magazine.

43 thoughts on “Autographs in the Rain”