WOW! What a varied and bold life she has lived. I won’t go into a lot of detail because I want to get to her amazing books, but here’s an excerpt from the bio on her website.

A high school dropout, and a mother at 17, in her early years, Lily supported herself as a stock girl in the Hudson’s Bay Company, as a long distance operator for the former Alberta Government Telephones, and as a secretary (Bechtel Corp sponsored her into the States). She also was a cocktail waitress at the Fairmont Hotel in San Francisco; briefly broke into the male-dominated world of the docks as a longshoreman (she was the first woman to work on the SF docks and almost got her legs broken); founded and managed a homeless shelter in Marin County; co-created THE STORY SHOPPE, a weekly radio program for children that aired on KTIM in Marin; and eventually earned two Master’s degrees (one in Creative writing and one in the Humanities).

And now, for the books!

When ninety-year-old Bubbles receives a letter from Mexico City asking her to pick up her mother’s ashes, lost there seventy years earlier and only now surfacing, she hatches a plan. A woman with a mission, Bubbles convinces her hippie daughter Feather to accompany her on the quest. Both women have recently shed husbands and have a secondary agenda: they’d like a little action. And they get it.

Alternating narratives weave together Feather and Bubbles’ odyssey. The two women head south from Canada to Mexico where Bubbles’ long-dead mother, grandmother, and grandfather turn up, enlivening the narrative with their hilarious antics.

In Mexico, where reality and magic co-exist, Feather gets a new sense of her mother, and Bubbles’ quest for her mother’s ashes-and a new man-increases her zest for life. Unlike most women her age, fun-loving Bubbles takes risks, believing she’s immortal. She doesn’t hold back in any way, eating heartily and lusting after strangers, exulting in her youthful spirit.

Has Bubbles discovered a fountain of youth that everyone can drink from? 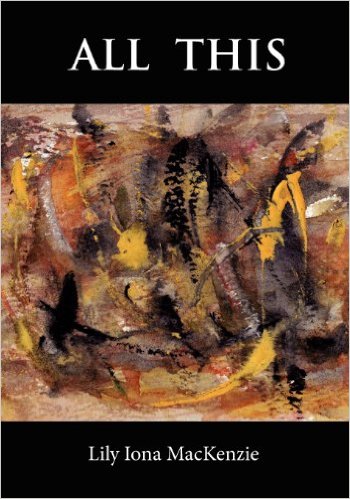 All This is wonderful collection of poems. Indicative of the title, the poems range from the conventional lyric/narrative that captures an intense moment of emotion, an epiphany glimpsed briefly out of the corner of the eye, to the more experimental. Some of the poetry use intertextuality, language from other works, to explore meaning, perception, and layers of experience. Other poems play with language, letting it lead into unexpected places, exploring new terrain. In a few, placement on the page conveys the feel of musical notation and phrasing, the page a theatre where the interaction of language makes meaning rather than recreates a remembered event. At times, words in a poem are treated as paint and the sheet of paper as an expressionistic canvas. A book of poetry to keep close by you at all times.

These are just two of this amazing author’s work. I invite you to visit her website for more info.

A note about the Rave Reviews Book Club (RRBC)

RRBC is a community of writers and readers who put their egos aside and support each other on social media, on our blog sites and by reading and reviewing books that appeal to each of us as readers. If this sounds like something you would love to be a part of, I invite you to visit the website and read all about us! Click here.

And if you join, tell them I sent you!!!